The Sad and Cautionary Tale of SmackHeaded Peter

Me as Mother Cheapside

Mother Cheapside certainly wasn’t my most glamorous role. But it was one of the most fun.

A clairvoyant who gets her messages through old black and white tellys, Mother Cheapside meets the title character of The Sad and Cautionary Tale of SmackHeaded Peter when he is only six months old. She predicts his rise to tyranny and is ultimately his last victim in this extraordinary play by Simon Glass. 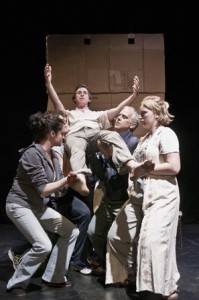 Set on the concrete hell-hole that is Thamesmead in London, England, the play explores the themes of tyranny, the role of the poor in a class-conscious society, and the effects of drugs and crime on that particular section of society.

I was thrilled to work once more with my old friend Heather Davies who directed me in Toronto Noir in SummerWorks 2009. It was lovely to do another strong ensemble piece – this time with a powerful choral speaking element to it. Here’s an interview with Heather as she describes her vision of the piece.

The show was well-received by audiences and critics alike:

Thanks also to Scott Gorman for his wonderful photos of the dress rehearsal. Click on the first thumbnail below to see the picture gallery. Click on Esc on your computer to exit.