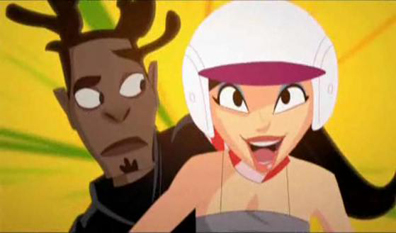 Ninjamaica is a cartoon pilot I voiced for Teletoon alongside a bunch of other Toronto stand-up comics. Although it seemed to be incredibly popular, given the feedback, it has not yet been made into a series.

On Sunday night I watched Ninjamaica again with great excitement – it aired for the first time on Teletoon in the Fred at Night slot.

Fred himself admitted in his introduction to the show (and on his blog) that he would be willing to date one of the characters – I’m hoping he’s straight and he’s talking about Kay Cockburn. He might be talking about the scary German tourist I voiced also – hell, I dunno what he’s into.

I didn’t realize that the pilot is available for download for free from iTunes, so I downloaded it and formatted it for play on this website – now you can bookmark it and watch whenever you want – hooray!

If you like the pilot and would love to see it made into a show (and provide a bunch of talented but poor comics with something approaching a living wage) then please contact Teletoon and let them know!

In the meantime, here’s Ninjamaica in all its glory (you can watch it full-screen if you click on the little expand button in the bottom right):