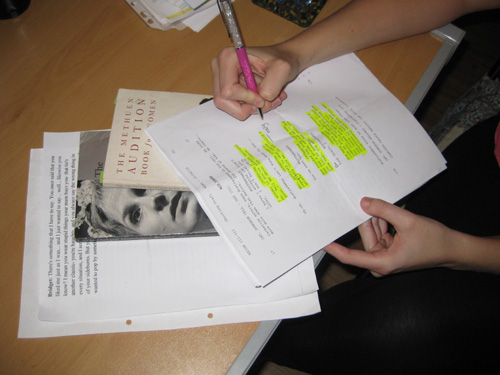 Marilla Wex is an award-winning English voice artist with over twenty years experience specializing in British dialects and 10 years coaching Canadian, Australian and American actors in RP (Received Pronunciation or standard English) and other British accents. She is currently working on ABCs Designated Survivor. Previously she has worked on CW’s Reign and coached actors for Canada’s prestigious Shaw Festival as well as countless theatrical productions including Skylight, The Railway Children, and The Sad and Cautionary Tale of Smackheaded Peter.

She approaches each project or client with a flexible attitude and a battery of strategies at her fingertips. Her passion for accuracy and fluency means that her clients never sound “clipped” or unnatural (a personal bugbear developed over ten years of listening to bad English accents in north American tv, film and theatre).

Her work in front of and behind the camera has taught her that almost anyone, given the right coaching, can master an English accent.

Got an audition coming up? Need to work on a specific British dialect? Want to stop sounding like Dick van Dyke? Get a genuine British dialect coach. Contact Marilla.

Working with Marilla is a joy. She is committed, concentrated and cares. It’s great to have a dialect coach who is British working with actors on British plays because the actors sound authentic and are not reaching for an attitude but sound as if they’ve walked the streets and roads of England.

Marilla’s coaching was a cornerstone of my rehearsal process when I was working on David Hare’s Skylight. Her keen ear misses nothing, and though I was already very experienced with the kind of British dialect I was using, her guidance allowed me to truly meld my whole voice with that sound in a way I have never achieved before. Her manner is direct, precise, and often humorous which makes taking her notes and suggestions a pleasure, and her understanding of phrasing and tone was an enormous help to me when working on such a dense text.  My work in the production owed a great deal to her incredible support and I know I will turn to her time and again in preparing for future projects. I cannot recommend her highly enough.

Marilla is an excellent dialect coach with an ear for the nuances that bring authenticity to English accents. She coached me for a series, and we got our stamp of approval after fooling locals of the region of that dialect. (Amber was nominated for a Canadian Screen Award for her performance.)

Marilla is a fantastic dialect coach. I managed to learn a Manchester accent AND and Aussie accent within a few days. I’ve never been able to trust my ear when it came to dialects, so Marilla went out of her way and e-mailed me my script with the accents written out phonetically, which made all the difference for me. She even offered a recap session before my audition to make sure the dialect sunk in properly. With Marilla’s expertise and encouragement, I booked that Australian character, I couldn’t have done it without her! I highly recommend her.

Marilla Wex is one of the most helpful and intelligent teachers I have ever had in my acting career. When she’s teaching you a dialect she breaks it down into easy, comprehendible methods and explains the reasoning behind each one. Her knowledge of dialects is never ending yet she makes it incredibly easy to understand no matter how little you start off knowing. By the end of my first lesson I already felt significantly more confident in my abilities and throughout the weeks of fun and extremely helpful lessons I have learned so much more about the British RP accent. Also, as an experienced actress herself, Marilla knows exactly what is marketable in the film industry which helps her to teach you what you need to know to succeed. She is extremely knowledgeable about a vast number of dialects as well as being full of helpful advice about acting. I look forward to each lesson and by the end of each one I feel significantly more prepared and confident in my abilities. I feel extremely lucky to have found such an incredible teacher.

Marilla gave me invaluable assistance with my Yorkshire accent during our run of The Railway Children, and recently I hired her to teach me the difficult Geordie accent for my audition for the Broadway production of the new Sting musical The Last Ship, set in a Tyneside shipyard. I will engage her again immediately if I need to learn a regional English accent for an audition: her work is authoritative, precise and dependable.

I needed to learn British dialect for a play I was performing in and was insecure about where to begin. Marilla Wex helped me gain confidence and joy with playing with an accent. She also broke down all the preconceptions North Americans have about the British accent. She’s fun, lovely and knows what she’s talking about. She made me feel comfortable and confident in sustaining an accent for a whole play. Highly recommended!!!

Private lessons are available in person in Toronto or via Skype anywhere in the world. Contact Marilla for more details.

Marilla was absolutely brilliant working with the acting company on my production of The Sad and Cautionary Tale of Smackheaded Peter, (by Simon Glass), at Summerworks in Toronto, 2010. She was thoroughly prepared, always professional and made the dialect process fun for the actors. The play demanded several UK dialects; I was delighted with the way that Marilla worked with the company and impressed with the quality of dialect work that company achieved because of her expert support.

Not only do the North Americans rave about the British accent Marilla Wex taught me, the BRITISH people call it spookily good!